What’s Blooming on the LHT

Our 20 miles of trail in Lawrence and Hopewell Townships offer an abundance of eye-catching flora, and we want to help our friends identify them. Welcome to What’s Blooming on the LHT, an ongoing series of “field guides” to Mercer County plants.

November is here, and that means the LHT is awash in one last gasp of color. But it isn’t just about fall foliage — there are still flowers blooming and berries ripening. Get out there before the frost and see if you can spot these hardy blossoms.

Winged Sumac (Rhus copallinum) is also called shining sumac, dwarf sumac, or flameleaf sumac and is native to eastern North America. Winged Sumac is actually a member of the cashew family and is a small to medium-sized deciduous tree, rarely growing taller than 18 feet. These trees are versatile, able to thrive in sun or part shade; adapted to nearly any soil type; and are even able to tolerate salt spray in coastal areas. That means these trees are common and easy to spot once you know what to look for — they are domed and often shrublike with low or dropping branches and multiple trunks; have lustrous almond-shaped leaves; and feature soft yellow clumps of summer flowers that mature into rich purple-red berries and seeds in fall. The berries are edible and can be used in teas — if you get to them before the birds, which are drawn to Winged Sumac fruit during fall migration. Right now, those berries are joined by glossy red foliage — one of the many reasons this tree is commonly used in landscaping projects. 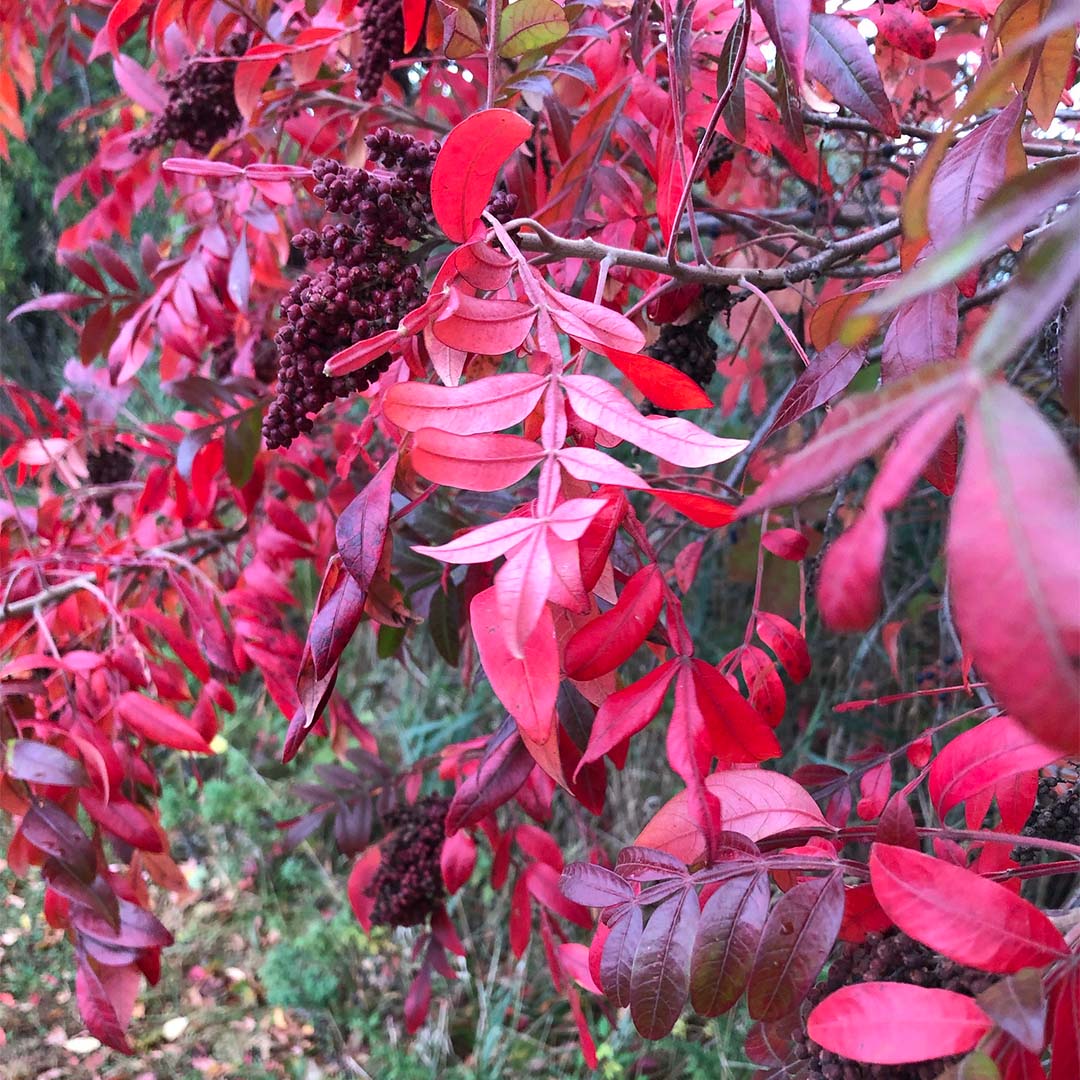 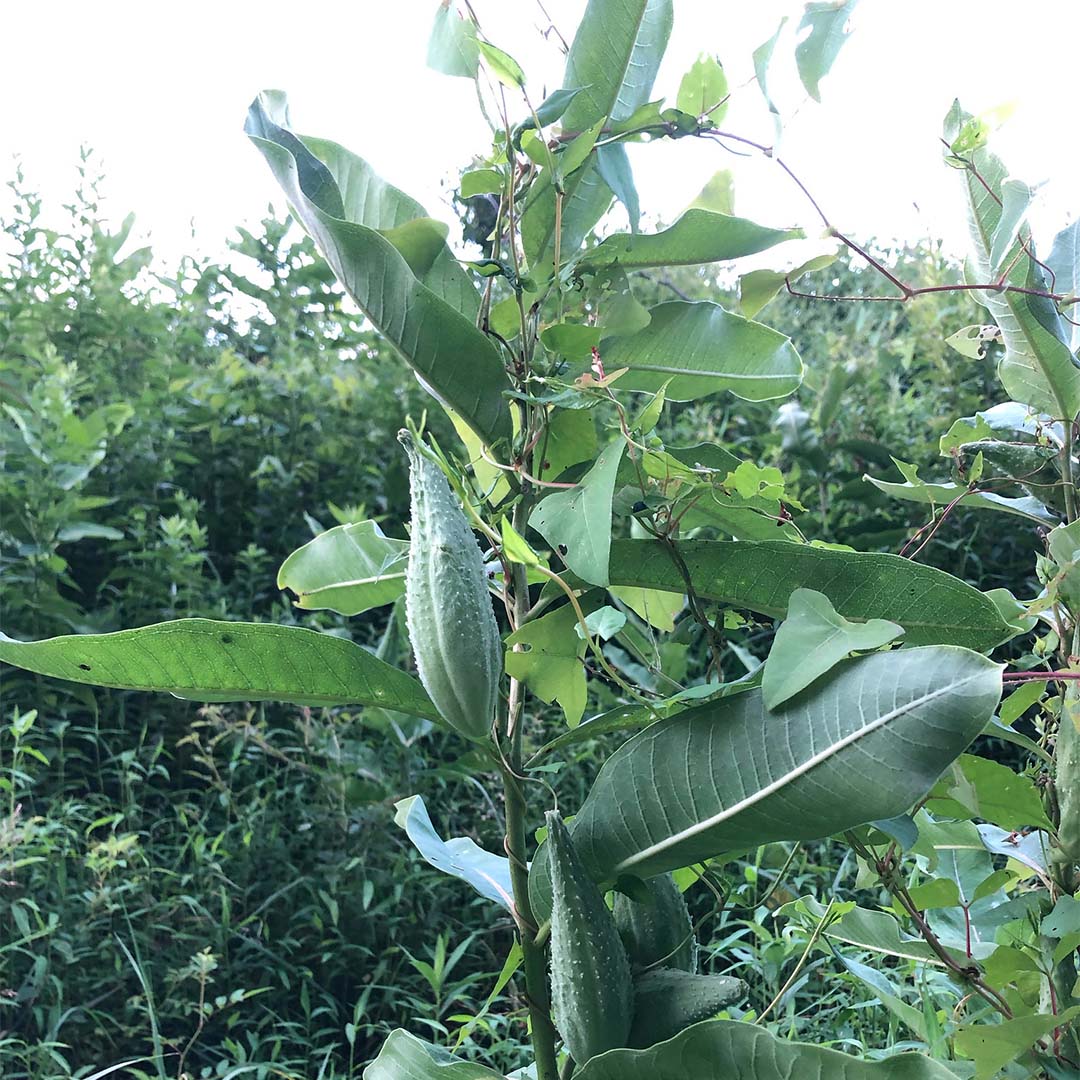 Common Milkweed (Asclepias syriaca) is sometimes referred to as butterfly flower, silkweed, silky swallow-wort, and Virginia silkweed. The variety is one of many kinds of milkweed native to North America — all of which produce a white latex liquid when cut, hence the name. Common Milkweed thrives throughout much of the United States and Canada east of the Rocky Mountains — everywhere except the driest prairies. These perennial plants can grow nearly six feet tall, thrive in full sun, and can tolerate most soil types. While Common Milkweed actually blooms during the summer — with umbrella like clusters of small white, pinkish, or soft purple flowers among ovate, waxy leaves and sometimes reddish stems and veining — it’s their seed pods and seeds, exploding now, that are most fascinating. They’re textured and alien-looking — oblong pods that split to reveal long, fluffy, hairy seeds. Common Milkweed is a tremendously important part of the ecosystem — over 450 pollinators and insects rely on the plant; and monarch butterfly larvae feed exclusively on various milkweeds. As milkweed has become less common — herbicides, habitat loss, and otherwise — so have monarchs. Fortunately, conscientious gardeners are introducing more of these rhizome plants in native and pollinator gardens.

Japanese Honeysuckle (Lonicera japonica) is native to eastern Asia and was introduced to the United States and other regions as an ornamental plant in the early 1900s. While it is considered invasive in some places, you may still introduce the vine to gardens here in New Jersey — it’s a fast grower, has edible flowers (avoid the rest of the plant, however, it can be poisonous), features a sweet, vanilla fragrance, and is often used for erosion control or to support deer and other wildlife. The vines can climb trees and buildings over 30 feet, and can be identified by their simple, oval leaves and their long, double-tongued flowers ranging in color from white to pale yellow. Spherical, black berries are produced in the fall, alongside a last wave of flowers. Young plants have red, fuzzy stems, while older vines are woody and sometimes hollow. Plants spread quickly via shoots, rhizomes, and even seeds spread by animals who feed off flowers and berries — hence the appearance of Japanese Honeysuckle in wild spaces, especially along the edges of or in clearings within woodland. Japanese Honeysuckle is adaptable but does best in full sun. And, in Chinese Medicine, the flowers and dried leaves are used to treat the flu, sore throats, inflammation and other ailments. 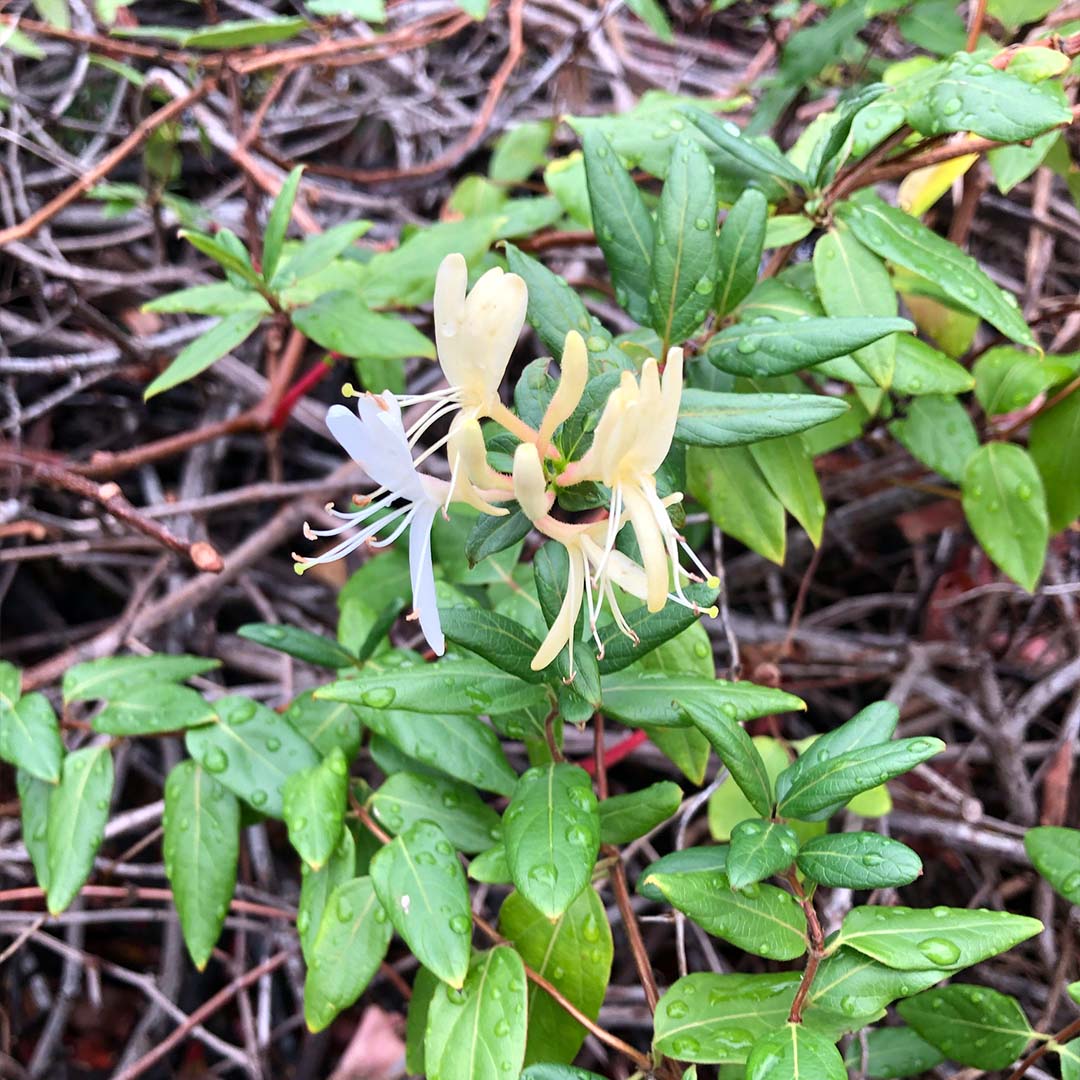 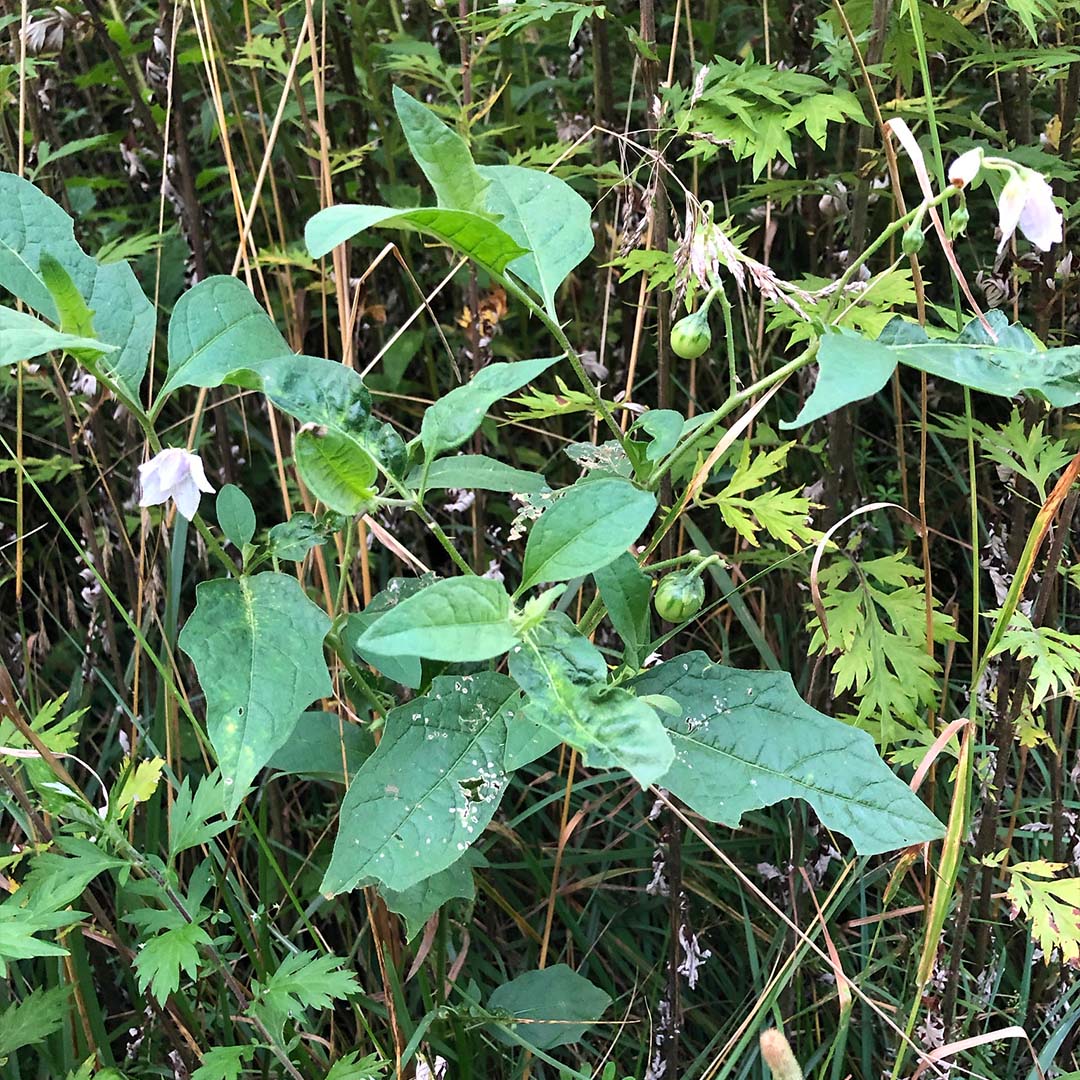 Carolina Horsenettle (Solanum carolinense) isn’t a nettle — it’s actually a member of the nightshade family (which includes eggplant and tomatoes). Otherwise known as devil’s tomato, radical weed, tread-softly, sand briar, or bull nettle — among other regional and common names — the herbaceous perennial is native to the southeastern United States but has spread to most temperate regions here and even in Europe, Asia, and Australia. Be careful around Carolina Horsenettle: the plants can be poisonous, and their stems and the undersides of larger leaf veins are covered with small prickles. Leaves are hairy, oblong, and irregularly lobed; and five-petal flowers are small, ranging in color from white to light purple with yellow at the center. The blossoms are similar in structure to those aforementioned tomato and eggplant flowers (as well as the poisonous nightshade vine). Growing about three feet tall, the plants produce small berries resembling tomatoes with both flowers and fruit emerging throughout the summer into fall. Various birds, insects, and mammals feed on Carolina Horsenettle, which spread via rhizome or seed and do well in pastures and along roads in full sun no matter the soil type or moisture level.