We Love Our Volunteers: Virginia Sari

Volunteers are the backbone of the LHT — clearing trails, installing signage, stenciling paved areas, and keeping an eye out for the many maintenance issues that our heavily-travelled trails need addressed. We owe a lot to these folks, and we wanted to share their LHT stories. If you want to join one of our volunteer teams, shoot us an email — we’d love to have you!

Meet Virginia Sari – a laboratory coordinator at Princeton University, help-lending extraordinaire, Lawrenceville resident, and one of the LHT’s star volunteers. 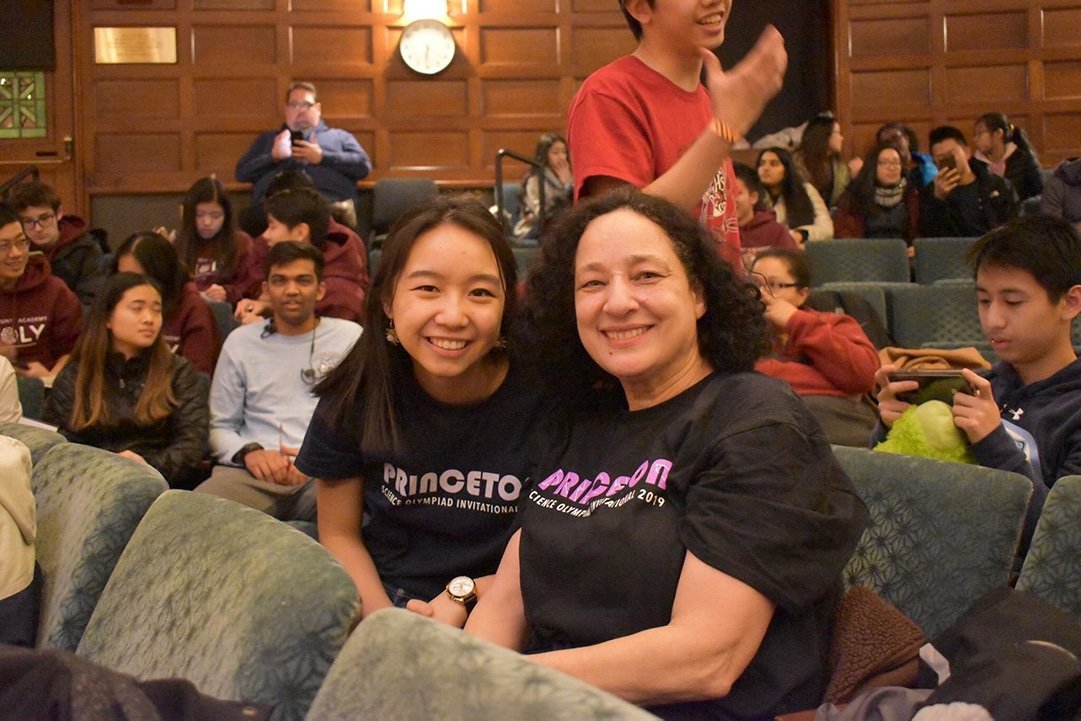 LHT: Can you tell us a bit about yourself?
Virginia: My name is Virginia (Ginny) Sari. I have lived in Lawrenceville since 2007 with my husband, Turgut, and I have three — children Angela, Vincent, and Hakan. I grew up in Hamilton Square, but attended St. Joachim’s School in Trenton for elementary school, then I went to St. Anthony’s High School in Hamilton. I followed up with graduating Summa Cum Laude from Fairleigh Dickinson University for my bachelor’s degree in Chemistry with a second major in Mathematics. I will have worked for Princeton University for 30 years as of this coming September! I am the senior laboratory coordinator for the Chemistry department. I prepare the labs for the undergraduates, mostly freshman, and I make the chemical solutions, fill the samples, set up and clean up the weekly labs, and I order all the chemicals, supplies, and equipment. I supervise 11 student workers during the school year. In the fall semester, I prep for about 350 students, and 200 students in the spring semester. I love my job and hope to be able to work another ten years. It is lots of fun and I am so grateful!

I have volunteered for many years for various organizations locally and nationally. This includes serving two terms as treasurer for the National Association of Scientific Materials Managers (NAOSMM), where I received the service award in 2012 and manager of the year award in 2019; and receiving a service award from Immaculate Conception Church in 2006. Also, I have helped scouts as a girl scout leader for six years, and a cub scout leader for an additional six years. I counted the money in the Bingo room for ten years and ran the kitchen at the basketball events for about 6 years at ICS in addition to other work with local schools. I also ran a community garden in Trenton for ISLES until 2003. Currently, besides being a Lawrence Hopewell Trail volunteer, I am also on the board of trustees for West Trenton Garden Club and I’m on the Birmingham Garden committee in Ewing. If anyone asks for help, I must help them!

LHT: How long have you been volunteering on the LHT? What inspired you to lend a hand?
Virginia: I started volunteering for the LHT when my son was a boy scout about five years ago when the LHT sent out an invitation to the boys to volunteer. When I checked it out, I learned they really needed adults, too. So, I signed myself up.

LHT: What kinds of projects have you worked on?
Virginia: For the first four years, I worked on the trails near the Brearley House. I mostly clipped the overhanging vegetation on the trails and reported if I saw anything wrong. I also assisted Kurt Vollherbst and others in hanging the trail markers near Princeton Pike and Province Line Road. This year, I have been switched to another section of the trail to monitor. I now have the Maidenhead Meadows section up to Carson Road Woods and I am enjoying my new assignment.

LHT: Do you do work on other trails or in other parks? Where and what type of work?
Virginia: I am not working on other trails, but I am doing weeding at the Birmingham Park at the corner of Parkway and Bear Tavern Road in Ewing. I am on the committee with five other members to identify all the plants we have at the park and make markers for them. It is a fine project in the making! So far, the West Trenton Garden Club has identified many plants and we were able to acquire the Blue Star Memorial Marker for the site.

LHT: How did you discover the LHT? What are your favorite segments?
Virginia: I didn’t know about the LHT until I became a volunteer! Of course, my favorite sections are the ones that I work on!

LHT: Do you have advice for other folks who have thought about getting involved with the LHT?
Virginia: I have encouraged others to get involved and was able to get one person interested and she signed up.