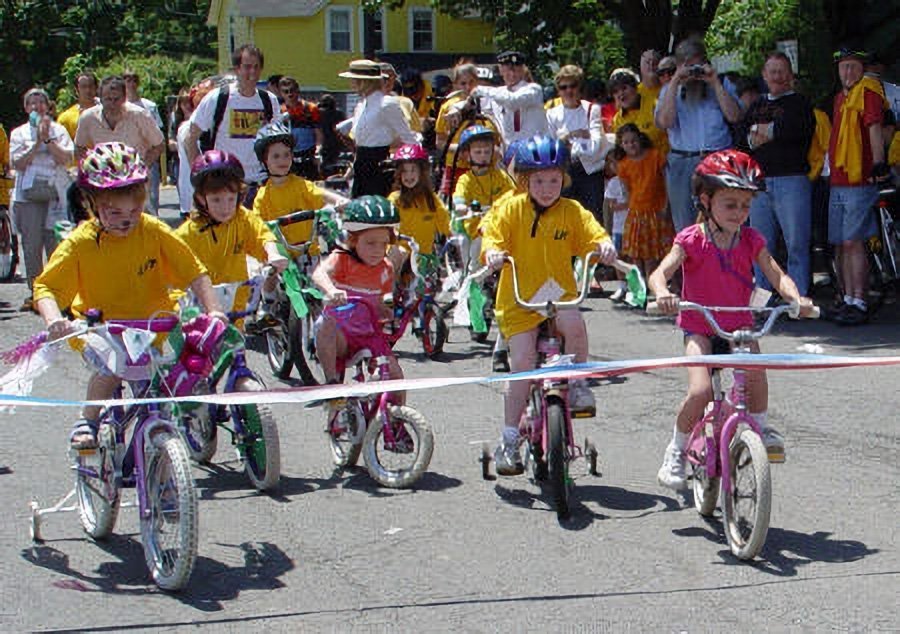 Children are the first to bike on the Lawrence Hopewell Trail during the Opening Day Celebration held as part of the Lawrenceville Main Street Jubilee in May 2004.

The first full leg of a 20-mile biking and walking trail in Hopewell and Lawrence was officially opened with a ribbon breaking ceremony today during the Lawrenceville Main Street Jubilee.

Joggers, bicyclists and walkers joined for the ribbon breaking and an inaugural trek of the trail.

The trail is intended for walkers, runners and bicyclists looking for a special way to exercise, relax, enjoy the beautiful natural environment in the area or even commute to work. As proposed, the 20-mile loop will join three Bristol-Myers Squibb sites, Educational Testing Service (ETS) and run through parks, school grounds, fields, woodlands and along existing streets.

“The possible uses for the Lawrence Hopewell Trail are endless. It is a place for families to stroll; a safe place for a child to attempt a two-wheeler for the first time; or a place to take in some fresh air and nature,” said Eleanor Horne, vice president of Educational Testing Service (ETS). “Indeed, this trail will have something for everyone in the community, which is why it has enjoyed such overwhelming support from public officials in the local municipalities, all the way up to our elected officials in the federal government.”

“Lawrence Township is proud to have been with the trail project from the beginning–when was just a great idea– until today, when it has become a reality. The residents of Lawrence Township now have another beautiful and safe recreational opportunity to enjoy,” said Pam Mount, a committeewoman in the township.

“For Bristol-Myers Squibb, the trail project has always been about giving back to the community. The partnership of elected officials, corporations and local non-profit organizations has started something that will surely become one of the true recreational treasures of Mercer County,” said Becky Taylor, senior director of Bristol-Myers Squibb.

Funds for the project are estimated to be $6 million, based on the eventual route(s) that are used. Educational Testing Service, which was first to complete a trail segment, has committed $250,000 to the project. Bristol-Myers Squibb has pledged $1.5 million, primarily for construction of the trails on its three sites in Mercer County. Local and county governments, with the help of state and federal grants, will fund the public portions of the Trail. The non-profit Lawrence Hopewell Trail Corporation has been actively seeking grant funds and private contributions, as well.

The Lawrence Hopewell Trail (LHT) will be built in segments, as they are approved by the local officials and communities. Bristol-Myers Squibb will begin work on its segment later this summer.

Please join us on Saturday, February 11, 2023, for another Saturday Morning Walking Club event. We’ll meet at Lawrenceville Fuel at 9:30 a.m. Click for map and other details.