Feathered Friends of the LHT

Slow down and look closer – our 20 miles of trail in Lawrence and Hopewell Townships host an abundance of birdlife, and we want you to be able to keep them all straight. Welcome to Feathered Friends of the LHT, an ongoing series of “field guides” to Mercer County birds.

Spring has sprung, friends! That means flowers are blooming and leaves are popping — and the birds are back. Here’s a list of spring residents you can spot here in central New Jersey. Some of them are very familiar, others may be new to you. But keep your eyes out for them all — they are classic harbingers of spring.

American robins (Turdus migratorius) are widely considered a first sign of spring — but the fact is you can spot them pretty much year-round. What you might not know is these thrushes are a very migratory species and the ones eating fruit from your holly in January are probably back up in Canada come spring. The robins you’re seeing and hearing now — their mood-lifting carol-like song often sounds like a cheer-cheer-up-cheerily — spent their winters further south. Nonetheless, these are one of the most abundant birds in the country, and their range includes most of North America. You can spot them running and hopping along lawns and grassy areas in towns, suburbs, and parks — almost everywhere. During the winter, these birds subsist mainly on fruit and berries; and in the warmer months they consume worms and other insects and invertebrates. Males and females look similar, with grey-brown bodies and orange-red breasts, white markings on their throat and wings, and sharp yellow beaks. Both parents will incubate their iconic blue eggs and feed their young — having two or sometimes three broods each season. Read more at Audubon.

As robins are said to be a sign of spring so, of course, they symbolize hope, renewal, new projects, and new beginnings. 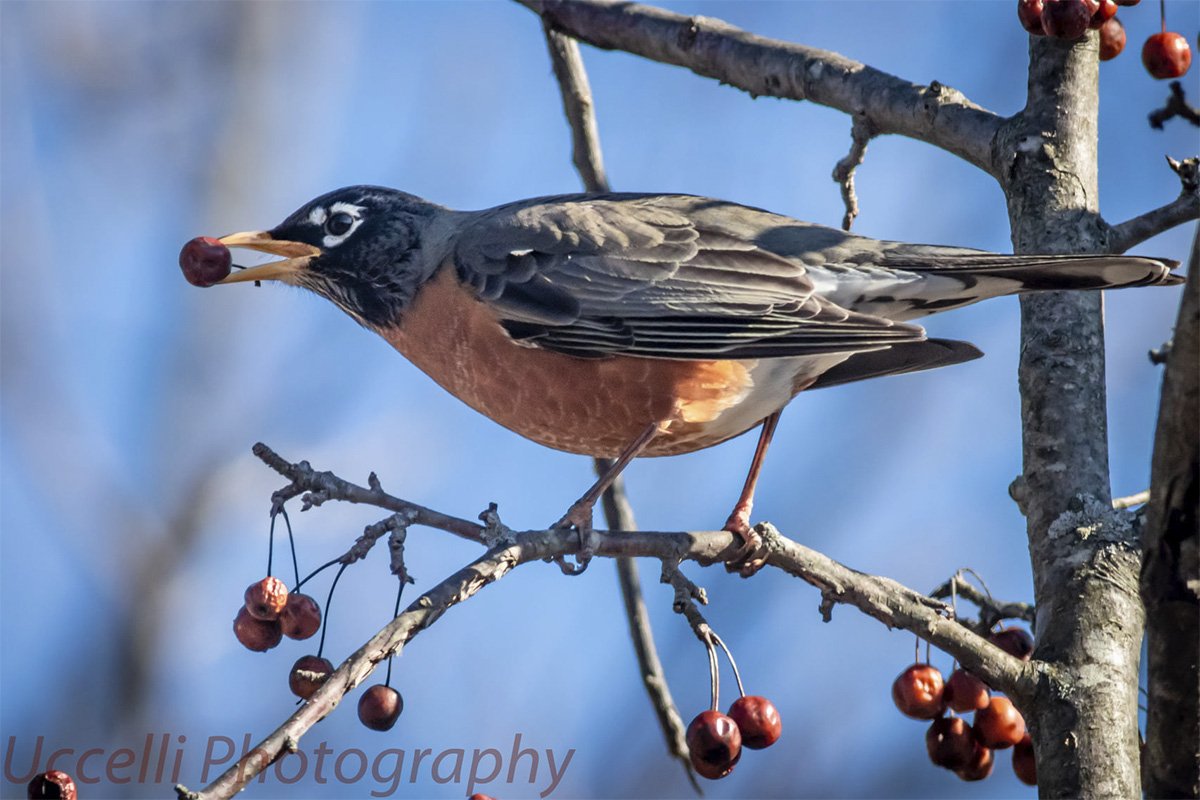 Red-winged blackbirds (Agelaius phoeniceus) are year-round residents here in New Jersey as well — but they’re more abundant in spring and summer; and that’s when the male’s iconic red shoulder badges are most pronounced. Like robins, they are widespread and abundant, with a range covering much of North America. Look for them in wetlands, swamps, near ponds and lakes, and in grassy and agricultural areas. You’ll often see them in congregate in flocks, especially outside nesting season. Males are black with vivid orange-red badges at the shoulder that are sometimes outlined in yellow; females have sparrow-like coloring — they’re brown, streaked with white, and have speckled breasts. Their diet is varied — they eat the seeds of grasses and grains, many types of insects and invertebrate, and fruit and berries come winter. Listen for a rich o-ka-leeee song or a series of metallic clacks. Females incubate two to six eggs and both parents feed the brood. They are fiercely protective of their young — groups will attack larger birds like crows and raptors if threatened. Read more at Audubon.

Red-winged blackbirds can symbolize a lot of different things. Their dark coloring can be considered a bad omen; but generally, they are said to bring good luck, prosperity, and protection.

Eastern bluebirds (Sialia sialis) were once declining due to lack of habitat. But, in recent decades, the species has been recovering — thanks in large part to nesting boxes in parks and backyards. The most widespread of the bluebird species, the eastern bluebird can be spotted as far south as Nicaragua. While it’s possible to spot them in central New Jersey year-round, they are more common and more abundant in spring and summer. Often found in small flocks, they like grassy suburban areas, farms, open woodlands, roadsides, and forest clearings where they feed on berries, insects, and sometimes even small frogs and lizards. Males are mostly blue with red-orange breasts and white bellies; females are similar with just slightly dulled down coloration. Beaks are sharp and black with yellow. Listen for a soft, melodious warble including a turee or queedle sound. Females lay three to seven eggs and do most of the incubation work; both parents feed their chicks. Pairs will have two or sometimes three broods each year. Read more at Audubon.

“Bluebird of happiness” is a common expression that relates to these birds being a symbol of joy, hope, good news, or even a connection to lost loved ones. 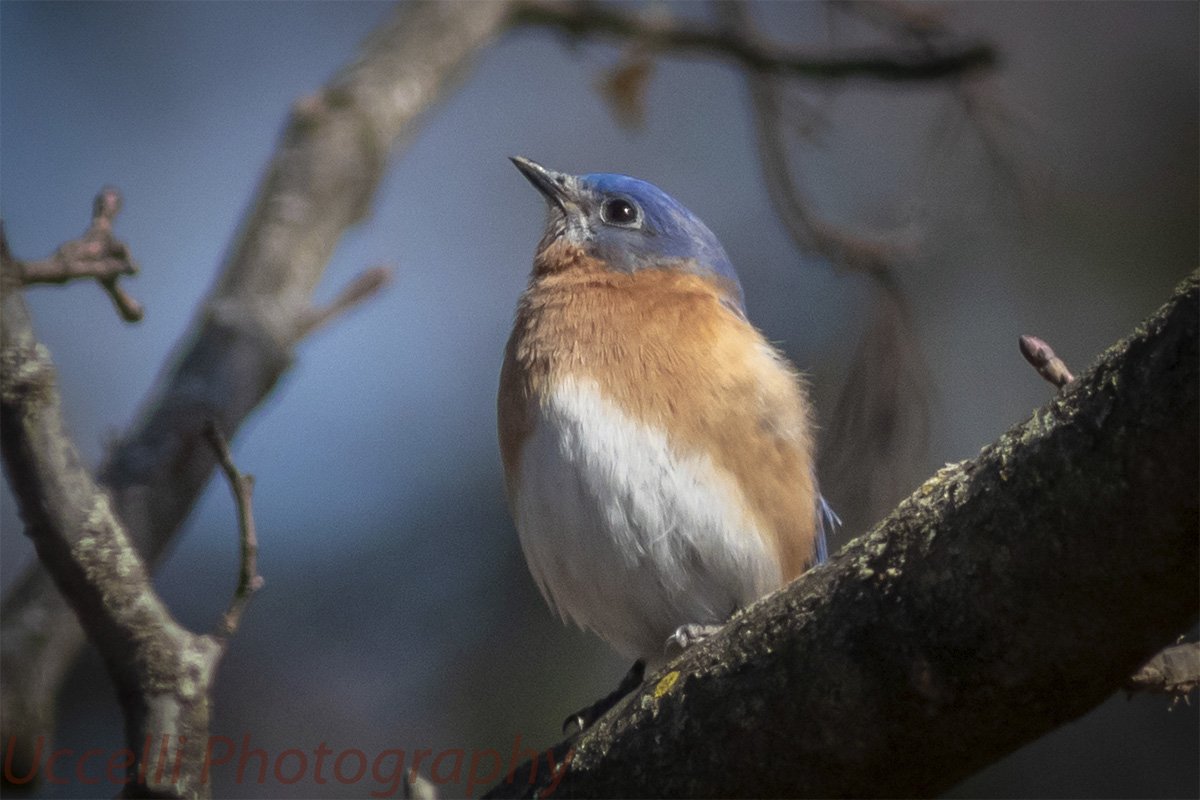 Ruby-crowned kinglets (Regulus calendula) are the hardest to spot birds on this list — for a few reasons. First, they’re very small and they move quickly. Second, while common and fairly widespread, they aren’t year-round residents — they’re best spotted during migration in spring and fall. Third, for most of the year they stay high in the treetops — but lucky for us, they forage in low thickets during their migration. Look for them in pine forests, open woodland, and water-adjacent thickets where they flit around in search of insects. Aside from bugs, they will seasonally feed on nectar, sap, and berries. These tiny acrobats are unassuming looking with green-grey bodies with green-yellow, black, and white at the wingtips and white around their eyes. The males, however, raise their tiny ruby-colored crest in breeding season or when agitated. Their jumbled, chattering song is loud — especially for such a tiny bird. Females lay and incubate an impressive four to nine eggs and both males and females feed their young. Read more at Audubon. 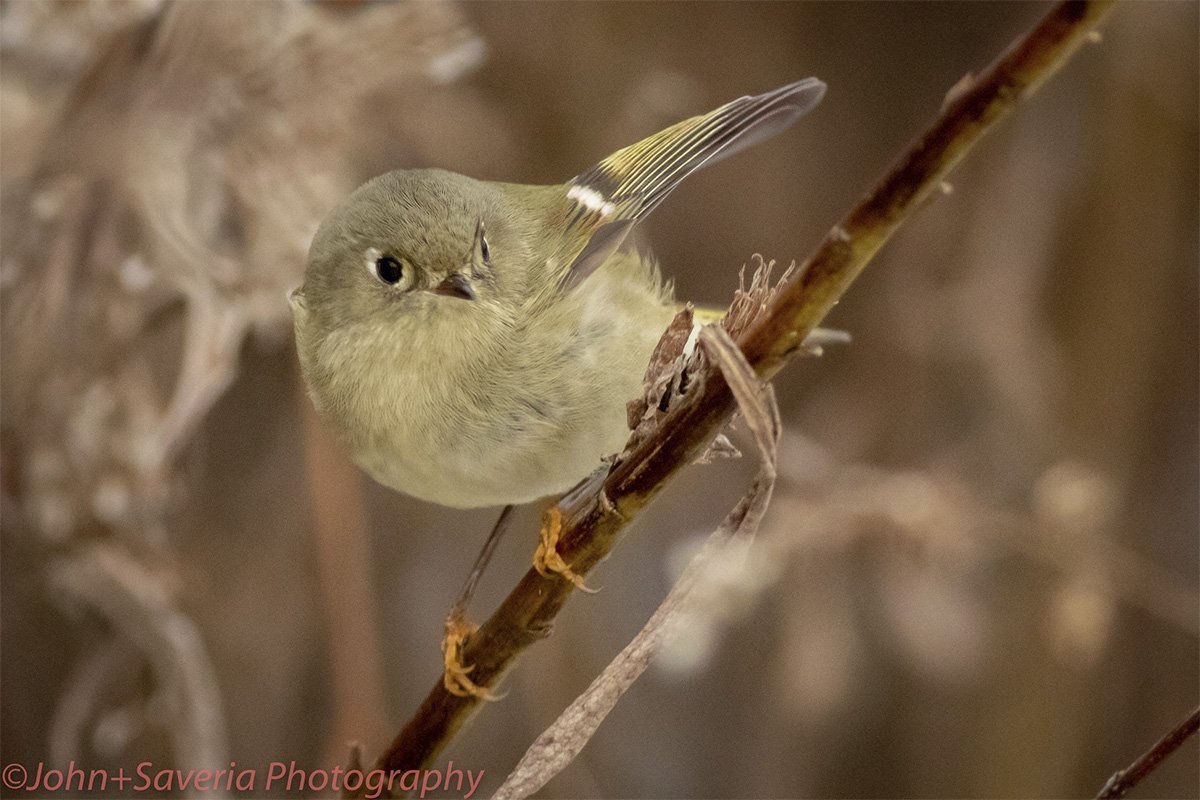