Feathered Friends of the LHT

Slow down and look closer – our 20 miles of trail in Lawrence and Hopewell Townships host an abundance of birdlife, and we want you to be able to keep them all straight. Welcome to Feathered Friends of the LHT, an ongoing series of “field guides” to Mercer County birds.

Summer on the LHT is alive with the color and song of migrant birds raising their young before heading back south for the winter. Some are easier to hear than to see — but these charmers are worth slowing down for. How many have you seen? 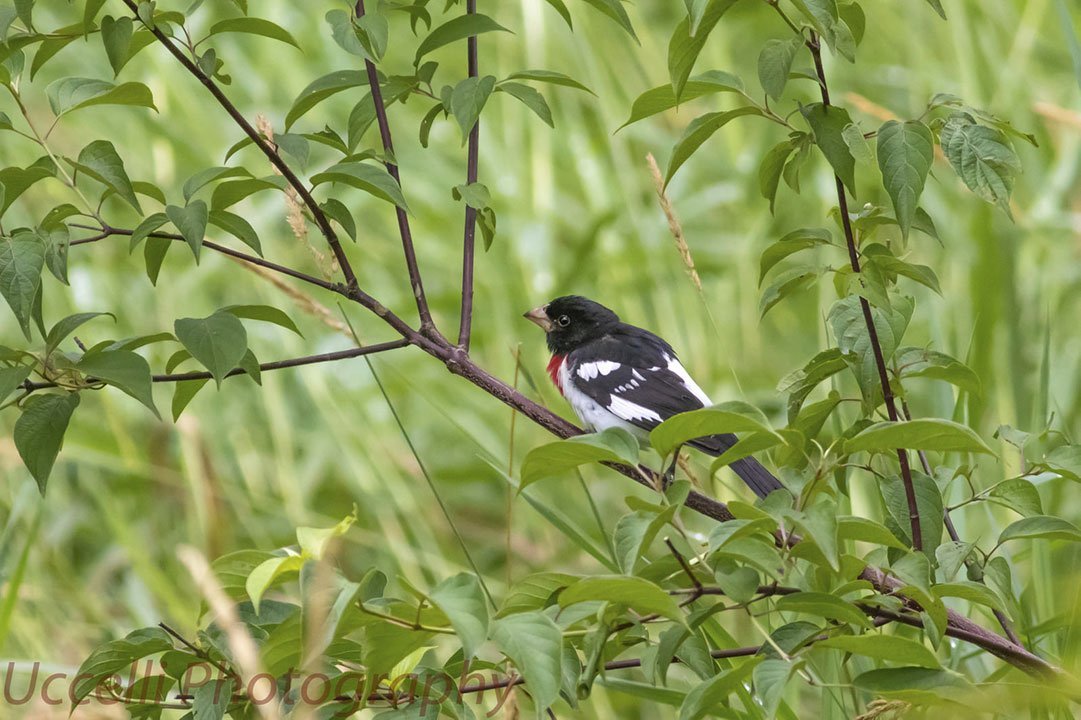 Common Yellowthroats (Geothlypis trichas) are — no surprise here — yellow-throated. Abundant in our area in the spring and summer breeding season, these cuties are widespread and easy to spot in damp and marshy grasslands, thickets, and creek or woodland-adjacent shrubbery. This tiny bird is a type of warbler, with males donning eponymous yellow throats and breasts along with black masks and white and brown-grey feathers along their heads and backs. Their female counterparts are a bit drabber, with mostly warm grey feathers along with yellow breasts. Listen for their signature wichity-wichity call as they flit about low growth areas in search of various insects to feed on. Pairs usually have two broods a season — of three to six eggs. Females incubate with males delivering meals; but once the eggs hatch, both parents feed the babies — for considerably longer than most other warbler species. Read more at Audubon.

Warblers symbolize self-expression, sociability, and a verve for life. Their long migrations also symbolize movement, finding comfort in new places, and expanding ideas and endeavors. Known for their musical warbles, these little birds often represent music, listening, and raising your voice to speak up for yourself and your feelings. 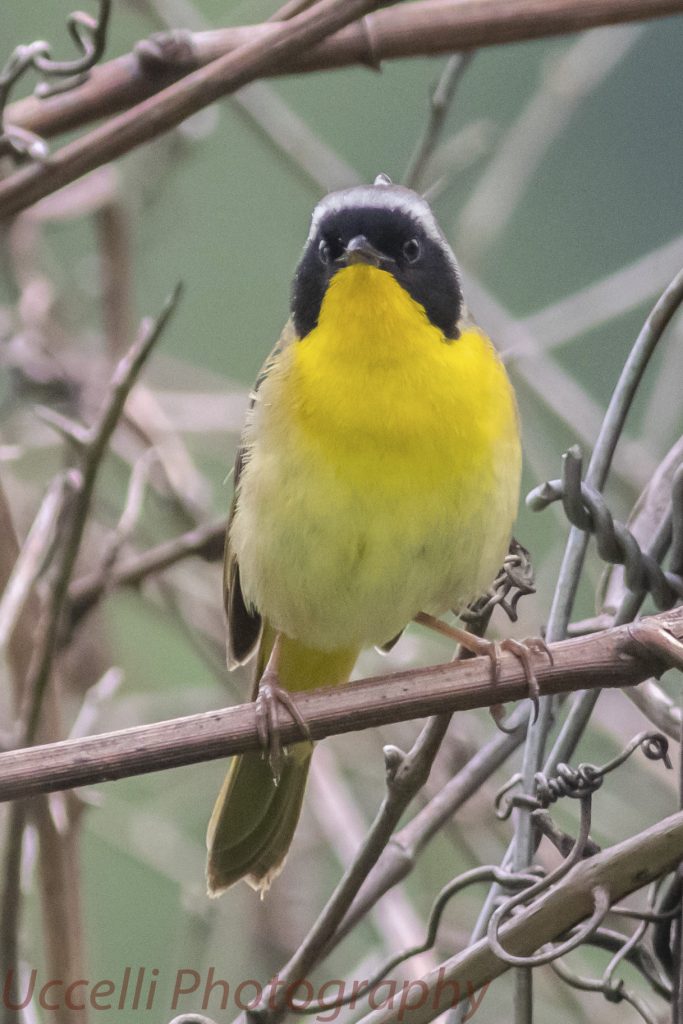 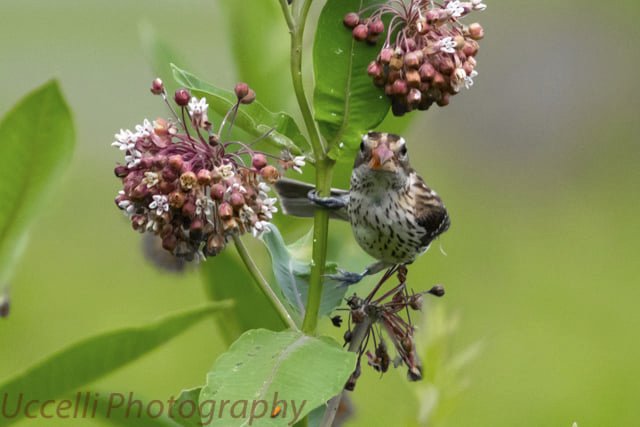 Rose-breasted Grosbeaks (Pheucticus ludovicianus) are closely related to our common but beautiful northern cardinals — which you can see in their broad, blunt beaks. And while rose-breasted grosbeaks are fairly common in New Jersey in the spring and summer, they can be hard to spot. They tend to keep to the treetops — in open woodlands, stands of trees, and in orchards. You’ve probably heard them, though — their eek-eek call is like that of a robin’s, just richer and more melodious. Males are graphic black and white with a light-colored beak and a rich rose-red breast while females are sparrow-like, with brown and white wings and speckled breasts. Omnivorous, rose-breasted grosbeaks feed on insects, berries, seeds, and flowers. Females lay three to five eggs with both parents incubating and feeding insects to the brood. Read more at Audubon.

Grosbeaks embody a gypsy spirit — traveling in unusual patterns in and out of their typical range following favored food sources. Further, the birds symbolize — with their showy, colorful feathers — a sense of uniqueness, joy, and self-acceptance.

Red-eyed Vireos (Vireo olivaceus) are another very common spring and summer resident that you may never actually see. Like the rose-breasted grosbeak, these vireos — who live in open and mixed woodland, along streams, and even in wooded suburban neighborhoods — tend to keep to the treetops. Acrobatic and small, red-eyed vireos have dark red eyes along with white breasts and eyebrows offsetting olive-grey wings and backs. The males and females are almost indistinguishable, from their slim, pointed beaks to their short, stubby tails. They feed on berries and a variety of insects; and their song — which is repetitive and musical — is also robin-like. Females lay three to five eggs and incubate but both parents feed their babies. Read more at Audubon. 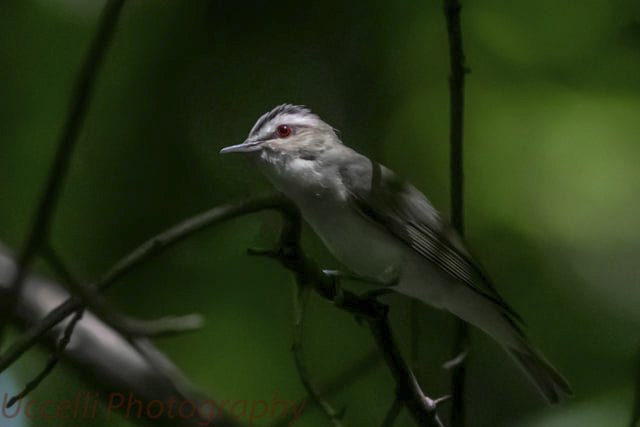 Seeing a green bird can mean there is adventure in your future; but olive green can symbolize wisdom.

Eastern Phoebes (Sayornis phoebe) are a common and charismatic site here in New Jersey in the spring and summer. And, being amongst the earliest arriving migrants, spotting one can be a hopeful symbol that spring is finally around the corner. These little flycatchers are tolerant of humans and can be easy to watch — living even in populated areas and along bridges, as well as in low growth areas, along creeks, and near woodlands. Unsurprisingly, flycatchers mostly consume insects along with some berries and fruit. Males and females look quite similar — they are robust, with white breasts, brownish-black and grey wings, heads, and backs, and pointed black beaks. Adorably, they often wag their dark, longish tails; and their distinct call sounds like they’re saying their own name — phoe-be, phoe-be! Eastern phoebes can raise two broods each year. Females lay and incubate their two to six eggs and both parents feed their chicks. Read more at Audubon.

If a flycatcher looks your way while it constantly scans for bugs for its next meal, it might mean that good luck is coming your way. 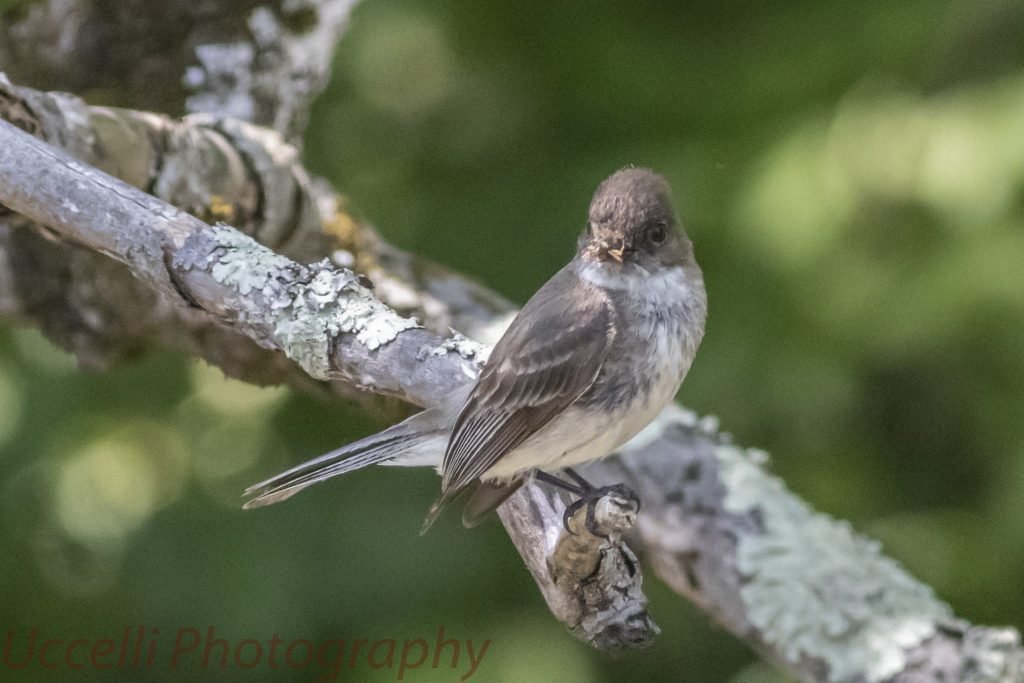