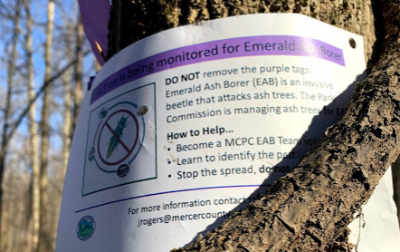 So as I was walking on the trail today, I saw there was a sign talking about the Emerald Ash Boarder. On the sign, it explained how they were dangerous to Ash trees and when I went home, I did some research and found out why. Apparently they are dangerous to ash trees because the females lay eggs in the bark crevices that are on the ash trees and the larva then feed underneath the bark until they become an adult. This insect has killed tens of millions of ash trees. I then read that you could help stop the spread of the pest by not moving firewood because by moving infested firewood, the Emerald Ash Borer is transported very quickly.