You may not realize it, but behind the LHT is a whole cast of characters working to keep the trail safe and thriving. Our all-volunteer board – a group of Mercer County residents with different areas of expertise and a range of interests – keeps the rest of us hiking and biking. It’s time to shine a light on these folks in our ongoing series: Meet Our Board. 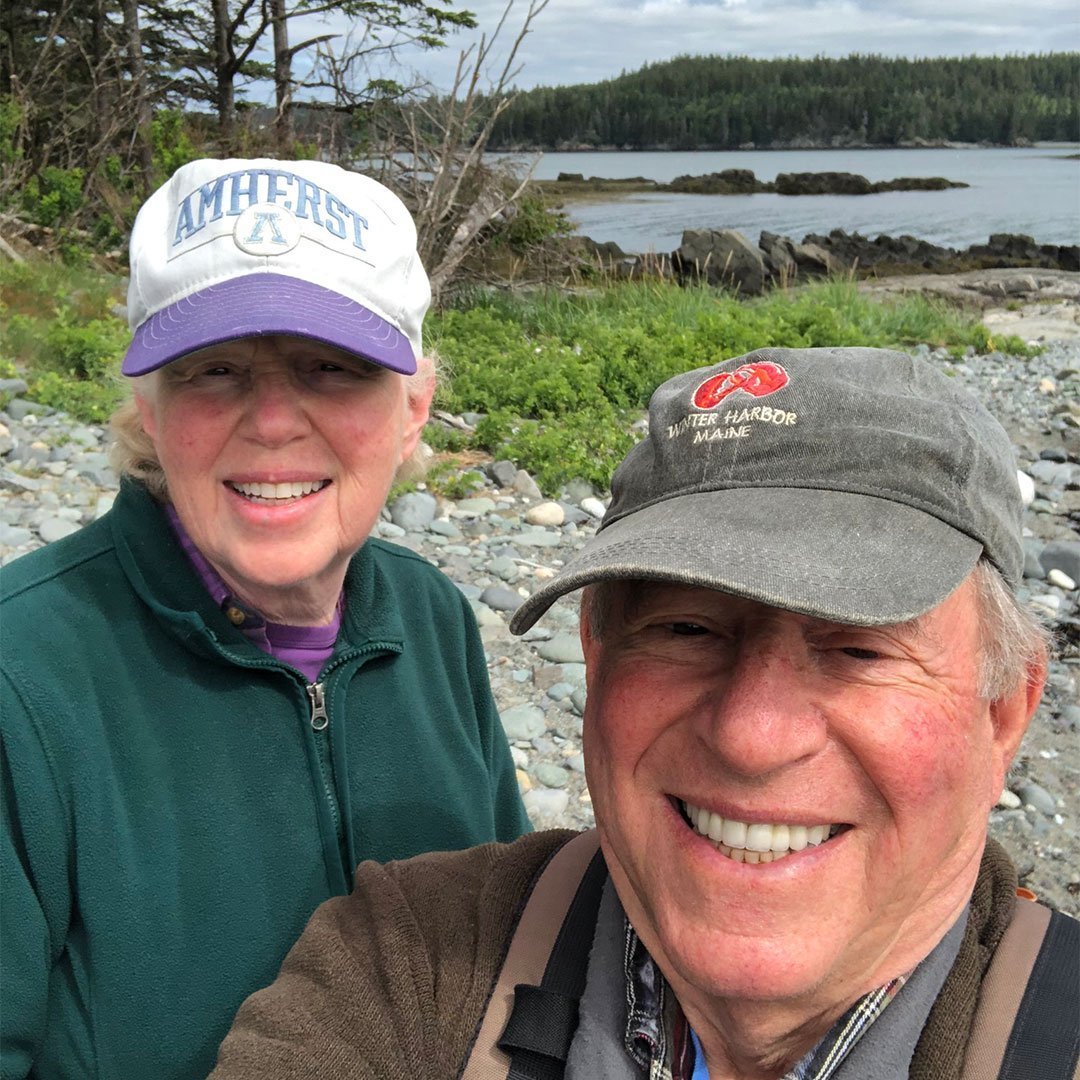 Alan Hershey, with his wife Phyllis Frakt, hiking along the cliffs of Downeast Maine, courtesy of Alan Hershey

Meet Alan Hershey, a public policy veteran with a passion for land preservation, land access, and trails in general. The LHT’s current treasurer and former D&R Greenway Land Trust board member, Alan founded the New Jersey Trails Association and spends his warm weather weekends physically building out public trails with a robust team of volunteers. His volunteerism recently won him the 2021 New Jersey State Governor’s Award (and we couldn’t be prouder).

LHT: Can you share a biography or statement regarding professional life and involvement in the LHT?
Alan: I spent my whole professional career doing public policy research – running rigorous real-life tests of interventions to help disadvantaged populations do better in employment, education, and long-term relationships. But I have also been an avid outdoorsman – hiking, skiing, bicycling, gardening. Making the outdoors more accessible and attractive to the public has been a long-standing concern – I guess reflecting the same impulse for the public good that got me into my career. That’s what working on the LHT means to me.

LHT: How did you discover the LHT? How did you end up getting involved?
Alan: I was aware of the ongoing development of the LHT for years. I had been a long-term trustee of D&R Greenway Land Trust, which is how I came to know my co-trustee Eleanor Horne (LHT Co-President). When term limits eased me off the board there, Eleanor struck while the iron was hot and invited me to join the LHT board.

LHT: How long have you been a board member and what projects have you worked on?
Alan: I joined the LHT board in, I think, 2015 and became treasurer in 2016. As treasurer, I have tried to strengthen LHT’s budgeting and financial accounting, as well as the clarity of our reporting to trustees. I also serve on the Development Committee and have helped secure foundation grants to support the LHT’s creation of historical marker signs along the trail, and its emerging efforts to reach a more diverse audience of trail users.

LHT: How did your career inform your work as treasurer?
Alan: In my 40-year professional career, I directed large national studies spread over numerous sites around the country. I had to care for not only the scientific integrity and value of these studies, but also their budgets and finances – a natural preparation for tending to the finances of the LHT. I also wrote a lot of proposals for major research projects – good preparation for trying to get grants for LHT.

LHT: As the full trail nears completion, what do you think is next for the LHT?
Alan: The board as a whole is mulling over that question. The big choice, I think, is whether the LHT will play a leading role in conceiving and developing more trails that connect to the main LHT loop. That would be great.

LHT: You spent time in Europe where you were inspired by trails, public space, and preserved spaces – tell us more about that and how that affected your work in this space here in New Jersey on and off the LHT board?
Alan: As a youth, I bicycled in France, studied in France, and hitchhiked most of Europe from Spain to the northern tip of Norway. I’ve hiked in the Alps, trekked on skis across Lappland, and wandered the rural trails of Czechoslovakia. 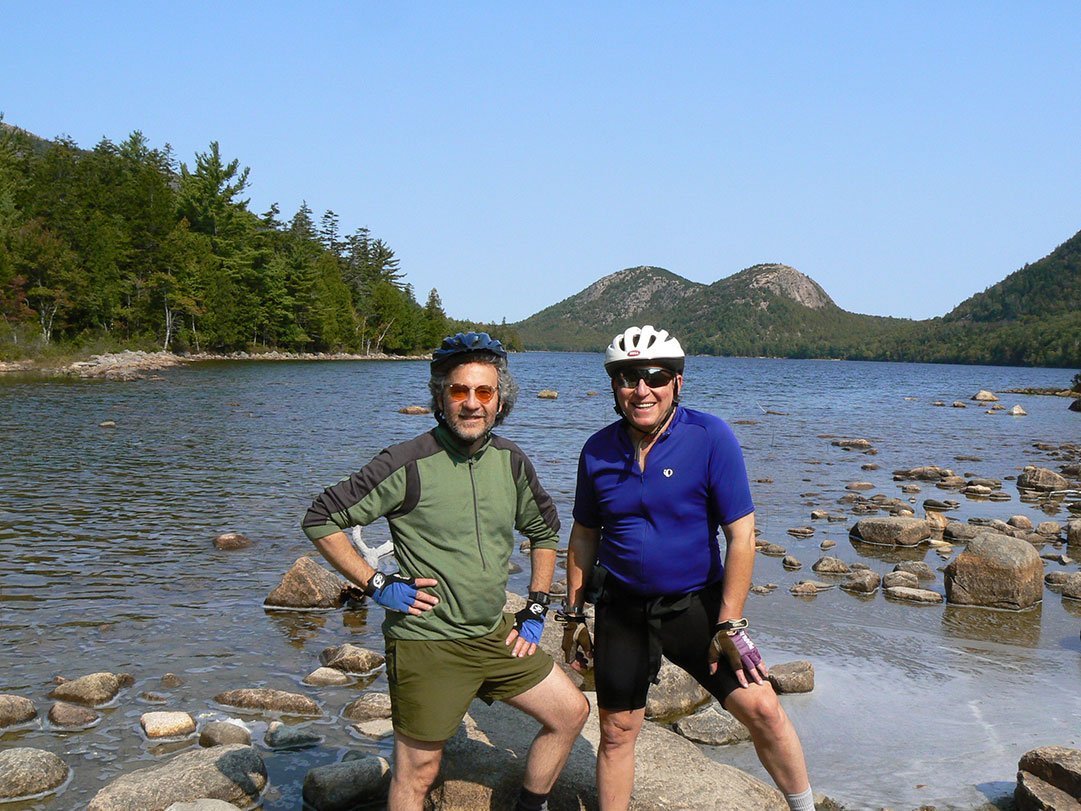 Alan in Maine with his brother Ron, courtesy of Alan Hershey

These travels exposed me to the downside of our strong American attachment to private property and awakened me to the importance of creating greater public access to open spaces and trails. So, at the D&R Greenway, almost since its inception, I was devoted not only to preserving open space, but to developing trails for public use. The LHT fulfills that same urge – to give us more freedom of movement in nature.

LHT: Tell us about the physical trail work you’ve been so involved in.
Alan: At the D&R Greenway, I started the New Jersey Trails Association, and we created a website that tells people where they can go for a hike on preserved land. But in 2005 I started assembling a corps of trail builder volunteers – now numbering over 200. Every weekend from September through May, we build hiking trails. We define routes, clear them, build bridges, construct stone stairways and stream crossings, and “sidehill” trails by digging them into slopes they cross. It’s tremendous fun, and it builds community.

LHT: Congratulations on your 2021 New Jersey State Governor’s Award – what was the nomination process like? What does it mean to you?
Alan: The real honor was the fact that one of our longest-serving volunteers took the time to nominate me for this honor. She wrote to the governor’s committee, describing my service at the D&R Greenway and the LHT, and they notified me that I would be recognized in an on-line ceremony, which took place on February 20.

LHT: Are there any segments of the trail that are favorites or of particular interest to you, especially in regard to land access or preservation?
Alan: I am very fond of the broad expanses of Mercer Meadows and the Pole Farm, particularly in late summer when tickseed sunflowers turn the fields into a sea of color. I am always enthralled by the pedestrian bridge crossing of the Stony Brook on Province Line Road east of ETS. I’m really looking forward to the development of the new segment connecting Carter Road and Cleveland Road – crossing land recently preserved as a result of a broad coalition of non-profits and government agencies, a big victory for open space.

LHT: Please share any words of advice or encouragement for amateur scientists and historians exploring the LHT.
Alan: Although some trail users use the LHT for transportation and commuting, I think the uniqueness of the LHT lies in its physical beauty – right in the middle of the country’s most densely populated state. Just use the trail – enjoy the fresh air, the charms of the countryside, and your ability to make your way through it on public and private lands. And respect those private lands; stay on the trail! 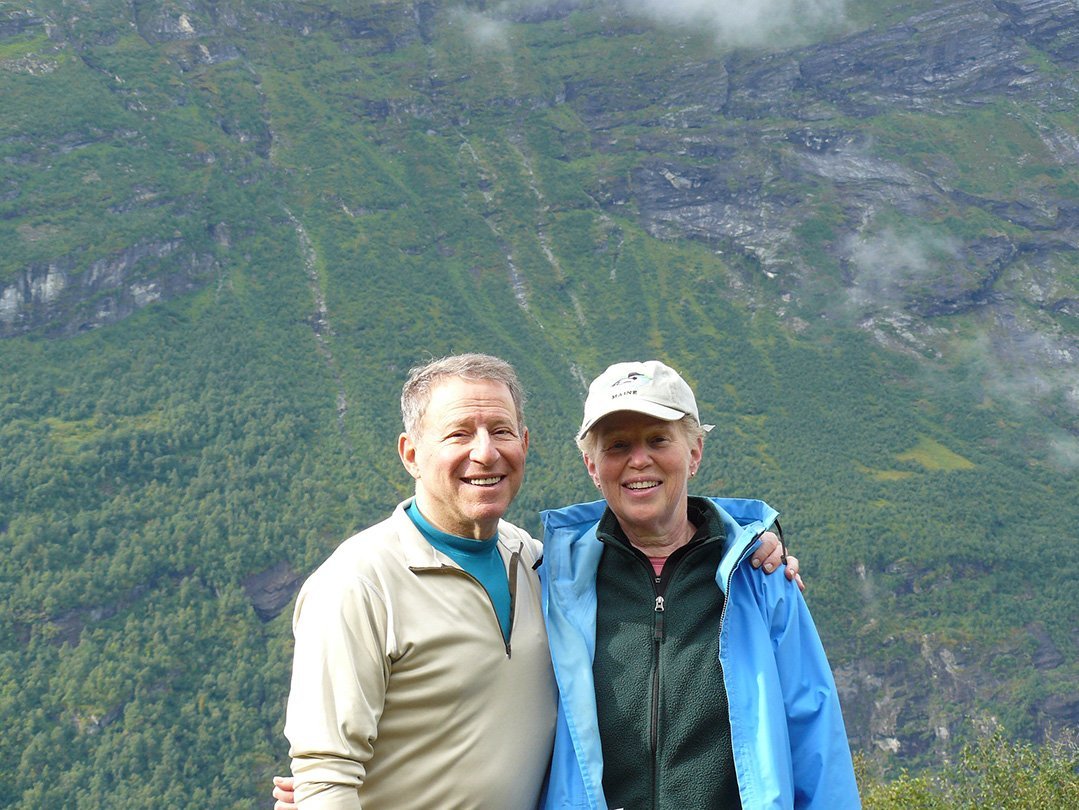 Alan Hershey, with his wife Phyllis Frakt, hiking above a fjord in Norway, courtesy of Alan Hershey